Heritage Lottery Fund has granted CAIRDE Teo the sum of £52,500 for a project based at Eamhain Mhacha/Navan Fort. The project will result in the creation of two Bilingual GPS Mobile Applications, one for young children and their families and the other for older teenagers and adults. The Navan Fort Heritage Apps will contain multi-media resources in the form of adventure games triggered by satellite GPS. The Apps are being created for the benefit of both the local community and tourists to the area and they will be available in the Irish language as well as in English. Downloading the Apps is free of charge and they will be designed to sit on iPhone, iPad and android devices. Armagh Council has also provided funding assistance for the project which is supported by NIEA who own the world renowned heritage site outside Armagh City. 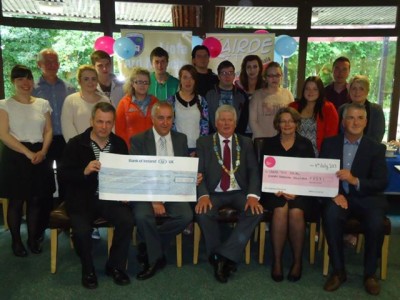 “Heritage Lottery Fund was delighted to support this innovative new project. Heritage and new technology might not seem like obvious partners but that is not the case. We are starting to see a range of creative digital heritage projects from creating new websites and apps, digitising collections and records to 3D modelling of inaccessible or fragile heritage sites. All these projects are bringing heritage to new and diverse audiences and letting people access and interact with their heritage in ways that suits them.”

The Eamhain Mhacha Heritage Apps project focusses on the heritage of the Navan Fort in Armagh, one of the most important prehistoric sites in Ireland. The Navan Fort Heritage Apps will help young people to learn about the archaeology and mythology of this ancient site and about how this heritage has been interpreted down through the centuries.

The site is a State Care Historic Monument in the townland of Navan, in Armagh City and District Council area. It is located on a low hill approximately 1.6 miles west of the city of Armagh (at grid ref. area H847 452). The site consists of a circular enclosure 250 metres in diameter, surrounded by a bank and ditch.

Archaeological excavations have revealed that the construction of the 40 metre mound dates to 95 BC. A circular structure consisting of four concentric rings of posts around a central oak trunk was built before the whole edifice was deliberately burnt down and covered in a mound of earth and turf.

According to Irish mythology and historical tradition it was the capital of the Ulaid, the people who gave their name to the province of Ulster. Legend relates that it was founded by the goddess Macha in the 7th or 5th century BC, and was the seat of Conchobar Mac Neasa in the tales of the Ulster Cycle.

The Eamhain Mhacha Heritage Apps project will create 2 GPS Mediascape Mobile Applications for the Navan Fort, one for young children and their families and the other for older teenagers and adults. The Apps will contain multi-media resources in the form of adventure games triggered by satellite GPS. The Navan Fort Heritage Apps will be for the benefit of the local community as well as tourists to the area and will be available in the Irish language as well as English. They will be available free of charge in perpetuity and will sit on both iphone and android devices

A group of young people will be mentored and trained in the latest technology to design and develop multi-media resources which will interpret the heritage of The Navan Fort. The learning will include research into the heritage and how it has been interpreted in the past. The young people will visit other locations to assess how heritage is commemorated in other places before designing, developing, implementing and recording their own project under the guidance of professional multi-media producers.