Antaine O’Donnaile from Macha Media and Ellen Bell from Digital Key joined CAIRDE Teo and the SEAS Enterprise group for a brainstorming session at the Newry & Mourne Enterprise Agency. After some initial research into the mythology and archaeology of the site, it was  time to focus our efforts into shaping the themes and narratives for the Eamhain Mhacha Heritage Apps project. The brief is to create two interactive, multi-media mobile apps located at Navan Fort, one for young children and their families and the other for older teenagers and adults. The apps will contain multi-media resources in the form of adventure games triggered by satellite GPS. The apps will be for the benefit of the local community as well as tourists visiting the area and would be available in the Irish language as well as English. 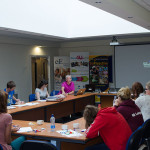 Antaine outlines the project to the SEAS Group

Discussing the attractions of the Navan Fort site. 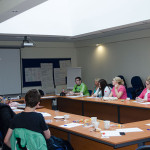 Ellen discusses the use of apps in heritage projects.

The aim of the brainstorming session was to ascertain which characteristics of Navan Fort made it unique and engaging for visitors. We needed to identify the learning outcomes  and the themes to be used to engage each target audience.  The session was broken down into stages in order to gradually build up a more detailed description of the target user and the content of the app.

The first two questions were used to identify the incentives and disincentives for visiting the Navan Fort.

Why would you recommend a visit to Navan Fort to a friend/family?

The atmosphere of the site; the feeling that the location is special and the mythology associated with it were all considered commendable features. The fact that the site is outdoors, has great views and is free and accessible all year round were considered to be important attractions. It was thought that children have a natural affinity with the site, that they feel a sense of freedom to run about and let their imagination run free. The guided tours, Iron Age dwelling and living history re-enactors were all identified as being enjoyable aspects of a visit. [The tour guides encourage the children to roll down the mound to make the sun come out.]

Why wouldn’t you recommend a visit to Navan Fort to friends/family?

The unpredictable Northern Ireland weather, the confusing heritage (history v mythology), lack of on-site interpretation and difficulty in finding the site (not a central location, lack of sign-posting) were all cited as reasons not to recommend a visit.

What aspects of the site engage you? What is the most important information to get across?

The view, the peaceful location and the sense that “it’s a magical place” attracted visitors to Navan Fort. The heritage of the site (“where myth meets history”) , the ability “to stand there,  knowing the history of the spot” and “to look at the view and see the history in your mind’s eye” were engaging aspects of a visit. The mythology  associated with the location, such as the story of Setanta, the history [both Pagan and early Christian] of the site and the knowledge and importance of Navan Fort were cited as important learning outcomes.

Primary school children, what are their likes and dislikes, what are the considerations for targeting this audience?

It was decided to target the 5-10 year age group as they are considered to be more imaginative and receptive to the myths and legends associated with Navan Fort. The consensus was that the 5-8 year age group would be most likely to play the app with an adult or older sibling, whereas many of the 9-10 year olds could play the app on their own device or on a school tablet (phone or tablet) [link to blog on OFCOM latest figures]. It was agreed that apps for this age group should be interactive, visual, humorous, colourful and contain engaging, repetitive sounds. Any text in the app should be kept to a minimum and be simple and accessible. The game shouldn’t be too challenging and that there is no need to differentiate between male and female users. NB many local children come to Navan Fort on a school visit.

What is the most appropriate theme for primary audience (5-10 yr olds)? What are the key outcomes, what is the narrative?

The app should focus on the myths and legends grounded in Navan, such as the story of  Setanta. The game should enable children to develop an understanding of the mythology of the location and engage them so they will want to return again. The game should be colourful, visual, humorous, interactive and feature engaging characters like story-tellers and warriors. The myths should be told with minimal text and plenty of atmospheric sound effects.  The experience needs to be suitable for younger children playing with parents/siblings (ie shared devices, no headphones) and  older children playing on their own devices (with headphones). The game should encourage the children to interact with, and explore the location, using specific locations as waypoints/chapters in the tales.

Teenagers – what are their likes and dislikes, what are the considerations for targeting this audience?

It was considered that the 11-14 years age group would be the most appropriate teenage audience, although, it was felt that teenagers were a difficult target group as so few would visit the site (without a car, access to the site is difficult and local secondary schools don’t visit). Adults were thought to be a better target group as they make up a large portion of the existing visitors and the resulting app could focus more on the interpretation of the history of the site.

It was thought that if targeting teenagers, the app should not be too childish nor too adult and “overwhelming”. There should not be too much text, but strong stylish characters and graphics. Again, humour was considered to be appropriate, and this age group was would have more of an appetite for action and realistic sound effects. Programmes such as Merlin, Dr Who appeal to this age group as would the use of  emblems, crests and coats of arms.

What is the most appropriate theme for a teenage audience? What are the key learning outcomes, what is the narrative?

The game should feature elements of the mythology and history of Navan Fort.  It should use Paganism/the Celts as a vehicle to explore the archaeology and mythology of the site and feature ghosts and rituals. The stories should be retold using graphics rather than text and feature engaging characters and action sequences with realistic sound effects. The game could include the ability to hold up the devices to reveal the hidden history of different locations around the site.

Next stages in the development process: to  carry out further research into the archaeology and mythology of the site, to try out the Digital Key heritage apps: Siege! at Carrickfergus Castle and Ghosts of Nendrum  and brainstorm the functionality of the games.